The City of Tega Cay implemented a Coyote Management Plan in December of 2016 after hearing from South Carolina Department of Natural Resources in November. City Council voted to hire a licensed trapper/contractor to trap and remove coyotes from certain locations in the City on an annual basis.

Information compiled below is from the South Carolina Department of Natural Resources and the North Carolina Wildlife Resources Commission. 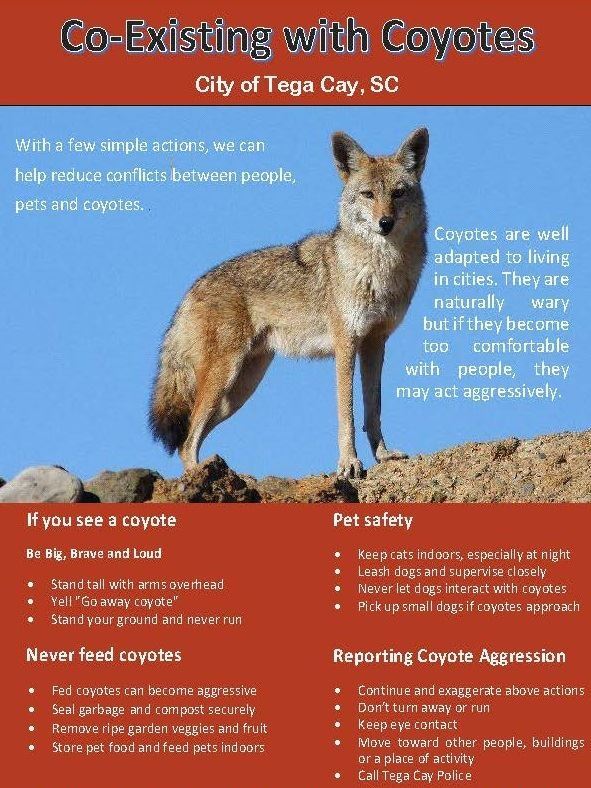 Coyotes have played a role in the lives of Americans as far back as this country’s history is recorded. Native American stories often depict Coyotes as clever and tricky. Coyotes get negative attention today because they sometimes prey on livestock and domestic pets. Coyotes are naturally wary of people and will avoid areas in which threats are perceived. However, they may become acclimated to humans in the absence of threats (such as hunting and trapping) and where food sources such as pet food, garbage and unsupervised small pets are available. Although some people find a Coyote’s howl unnerving, this howl serves many purposes. Coyotes howl to locate pack members, distract threats away from their den, or establish their territory. In the late summer, pups practice howling to mimic their parents. Because of the hollow tone of the howl, a pair of Coyotes often sounds like a huge group and may seem closer than they actually are.

The Coyote is named from the Aztec word, coyotl, which means “barking dog,” and is a familiar figure in many Native American stories. The Coyote is native only in North America and has the widest range of all wild canines in this country. It is one of the most adaptable mammal on this continent.

Coyotes can resemble Red Wolves, but Coyotes are smaller, have pointed and erect ears, and long slender snouts. Their long, bushy, black-tipped tail is usually carried pointing down. Color is typically dark gray but can range from blonde, red, to black. Coyotes may be mistaken for dogs or Red Wolves, and the existence of hybrids, though uncommon, makes identification more confusing. The Coyote has five toes on its front feet (including the dew claw that does not appear in tracks) and four toes on its hind feet. Its feet are smaller and narrower than an average dog with the same body size.

Originally, Coyotes inhabited the prairies and grasslands of the Great Plains. But as Europeans settled across North America, the subsequent landscape changes and elimination of wolves allowed Coyotes to expand their range eastward. Despite extensive control attempts, Coyotes have survived and expanded their range. When populations are reduced, the remaining coyotes respond by breeding at a younger age and producing larger litter sizes with high pup survivorship, making their populations resilient.

Note: The South Carolina Department of Natural Resources has never released coyotes into the state for any reason, including deer management. Coyotes first appeared in the upstate in 1978, they are now present in all counties of South Carolina.

Coyotes survive anywhere with food sources. Their habitat can range from agricultural fields to forests, to suburban and urban environments. They are adaptable in behavior and diet. Coyotes are ecologically valuable in keeping prey species, such as rodents and groundhogs, in check.
Coyotes birth their young in dens. Although coyotes usually dig their own den, they sometimes modify another animal’s den or a natural hole, such as under a rocky ledge, to suit their own needs.

In December 2016, City Council implemented a coyote management plan is to provide a management strategy and guidelines for staff responses to conflicts with coyotes. Public safety is the primary concern of the City and coyotes and other wildlife will be managed with human safety as the priority. The plan seeks to achieve a balance between the importance of human safety and the benefits of maintaining natural wildlife populations.

Read the Coyote Management Plan
In November 2016, SCDNR held a public forum on coyotes sharing information on coyotes, as well as taking questions from those in attendance.